The Fair Trade concept is an international movement that aims to ensure producers in 3rd world countries get a fair deal for their products. Producers of crops such as coffee, tea, cocoa and rice are paid a fair price and offered long-term contracts to guarantee a sustainable livelihood.

Why is there a need for Fair Trade?

The advantages of current international trade practices are only felt by a small percentage of the world’s population – mostly people in wealthy countries.

Small farmers are significantly disadvantaged when it comes to operating in world markets. They usually lack access to market information (eg pricing), transport and infrastructure to get their goods to a market of their choice. The consequence of this is that they are completely reliant on middlemen to come and purchase their product at their ‘farmgate’. Without any knowledge of world market prices and the lack of resources to seek out other buyers, they have little power to negotiate and are often exploited.

There are few alternatives for many of the farmers and to survive some turn to the cultivation of narcotic substances, child labor, migration to the slums of major cities or emigration.

Similarly, many plantation workers endure low pay, unsafe working environment and poor living conditions. Too often they lack the right to form unions and participate in decisions that affect their life on the plantation. Fair Trade strives to secure decent working conditions for plantation and factory workers according to standards set by the International Labour Organisation (ILO).

The Laotian coffee (in Rhino) is grown in the Champasak Province of Southern Laos by the Bolaven Plateau Coffee Producers (AGPC).  According to the International Fund for Agricultural Development (IFAD), AGPC is making great progress with the management of it’s cooperative and the quality of the coffee they are producing.

You can click through to the full report but the main points are; 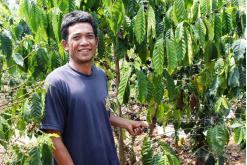 Mr Ki is a successful member of AGPC; he received technical assistance through the co-op and was able to increase his coffee field from 1/2 ha to 2.5 ha.  With the extra funds he has since built a new, secured his childrens education. His next challenge is to improve his water systems and getting access to electricity.  His biggest problem used to be running out of cash and having to sell his coffee for less than it was worth because he couldn’t wait for a better price.

We are currently the only company selling certified Fairtrade coffee from this co-operative in Australia, most of their crop is sold to France.

A report was produced by Lao’s Ministry of Agriculture  and Forestry, Dept of Planning and Investment about our Laotian coffee producers – the Bolaven Plateau Coffee Producers (AGPC).

For more information on Fair Trade in Australia, visit the Fair Trade Association of Australia and New Zealand at www.fairtrade.com.au